“We think too small, like the frog at the bottom of the well. He thinks the sky is only as big as the top of the well. If he surfaced, he would have an entirely different view.” Mao Zedong

As a kid my Mom and my Dad both would tell me to reach for the stars, shoot for the moon or the sky is the limit. They were trying to tell me that i could be great so that I would dream big! Well, I kind of took it literally when I was young.  I once asked my Dad to pick me up so I could touch the moon. He would pick me up so I could reach out and touch other things and in my mind touching the moon was not an unreasonable request!!!!  I mean, when you are riding down the road as a passenger in the truck at night and the moon is full, it’s just RIGHT THERE in the sky, a large yellowish orange circle!  One that I should be able to touch. It was so hard for me to understand and accept the words my Dad kept trying to explain to me, “I’m sorry but I cant pick you up to touch the moon.”  In my mind he COULD do that.  The moon was not too far away, all principles of time and space were irrelevant and just INCORRECT as far as I was concerned.  I never have figured out how to touch the moon but I am still trying to find a way. 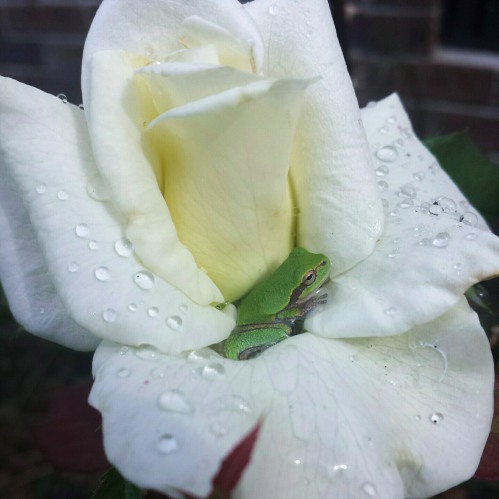 So what do the frogs have to do with the moon? We are like frogs in this large universe ~ tiny little creatures. Maybe, like the quote says, we need to think larger than the frogs.  We need to stop thinking the sky is only as large as the top of the well!  My whole life I’ve been striving to reach the moon, Earth’s moon, when really I should have been reaching for ALL of the moons in all of the universes!   AND all I needed was a different view…the view of a tiny frog.

Without Change there would be no butterflies.